Back in 1987 I began my journey in watercolor, eager to learn paint watercolors.
In those days I saw a great future in front of me. John Pike was my hero, he was the absolute top in watercolor. And also the first book I bought about watercolor was from John Pike!
Joseph Zbukvic and Alvaro Castagnet were not known yet these days. No books no videos, the dvd didn’t exists, and the founder from Facebook was still walking around in diapers! 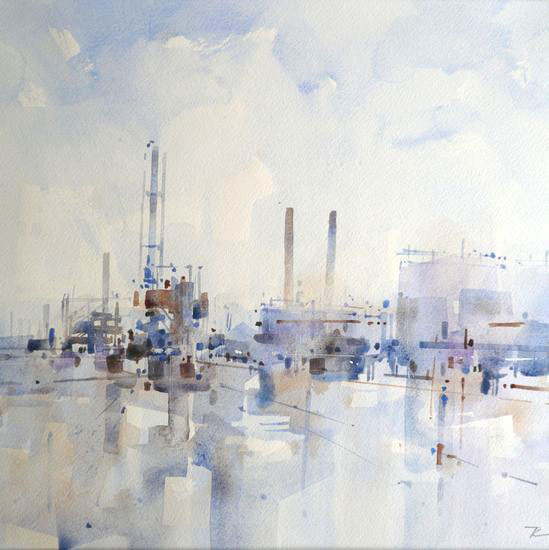 Zoltan Szabo and John Blockley filled up the numerous watercolor books, and in the Dutch magazines like Palet en Tekenstift you saw articles of Ron Ranson, Tony van Hasselt and the Dutch artist Kees van Aalst. later I found out that Tony is also a Dutch born artist!

Szabo was also a painter that I liked, only his techniques seemed so difficult to me! And of course Jan Groenhart a Dutch watercolor artist with wonderful Dutch landscapes and a master of how the North of Holland must look!

In those days you saw also watercolor books that were not so good, (in my eyes back then) I saw them in the bookstore and convinced myself that this was just very bad quality in watercolor. Just not my taste and not attractive. No… this is not what I want for my road to become a watercolor painter. That book was from Aubrey Phillips.

Oh boy what was I wrong there!
I was a novice in watercolor, and I didn’t recognized the sublimity of this painter!

It was in the year 2014, I was looking for John Pike photo’s I found a site from the Dutch artist Arie Jekel and when I saw the page from his inspiration I found John Pike, Edward Wesson, Edward Seago and Aubrey Phillips!

The first few artist were my heros too, but Aubrey Phillips I remembered, was that painter I disliked.
But curious why Arie did have Aubrey as his inspiration I looked up Aubrey’s paintings on Google to refresh my memory and instantly fell in love with the style and simple elegance of the brushstrokes. Apparently my mindset how watercolor must look was 180 degrees turned!

Aubrey Phillips caught me, and I want his book!!! And believe me nowhere in the Netherlands I found it, back in 1987 it was in every bookstore, and now nowhere!!

I found the book in the UK and it was in excellent condition, the only minor thing is that it smells a bit (worse) after a moist basement. I tried the freezer, Microwave, Cat Grits. It’s already better than it was, but okay I have the book!

The warm sky in contrast with the cool snow!

The lesson learned is that you have to look further and longer to a artist art. To understand and value it. Dont think its rubbish (like me back in 1987) but study how its done.

The Cotswolds on a September evening

Most of the time when it looks simple it is really hard to make! When something is wrong in a minimalistic watercolor, it stands out like a red flag, therefore everything have to be in the right place. When you see watercolors of the “cracks” among us you will notice the economy of brushstrokes, there is no clutter or mud, just well placed brushstrokes in just the right amount of pigment and water quantity.
“When you can do it in less than one brushstroke you are on the right way!” (J. Zbukvic)

A warm watercolor, and still its a winterscene! It breaths “keep it simple”

Another winterscene.  The vertical strokes of the brush are ideal to suggest water.

Summary:
Aubrey Phillips is a member of the Pastel Society and the Royal West of England Academy and was a Gold Medallist at the Paris Salon. He is a regular exhibitor in London and the provinces and runs his own art courses.

Aubrey R Phillips RWA. Renowned for his pastel paintings of the Malverns and the Black Mountains areas. Born 1920, Astley, Worcestershire. Aubrey Phillips studied at Stourbridge School of Art and at Kidderminster. Phillips lectured at Malvern Hills College and Bournville School of Art, and has had exhibitions at the Timaeus Gallery, Birmingham ( 1981) and at the Patricia Wells Gallery, Thornbury (1988). He is  also the author of books on the use of pastels and watercolours. Member of the RWA, PS,WSW and the Armed Forces Art Society. Solo exhibition at the National Library of Wales. Aberystwyth. Gained a Gold Medal at the Paris Salon in 1966. Phillips worked in and around the Midlands for a number of years in the 1970s, He has been called one of the leading landscape painters of the Midlands. his expansive changing skies are captured by strong strokes and his use of atmospheric colours. Lived in Malvern, Worcestershire.

If you like this article, you can read the sequel a friend of my made on his blog after reading this post about Aubrey Phillips.
Click the link below
“brushes with watercolour”

This site uses Akismet to reduce spam. Learn how your comment data is processed.